In the fall of 2014, former 35th Ward Alderman Rey Colon, alongside the Metropolitan Planning Council (MPC), carried out a participatory planning process to discuss the development of the underutilized city-owned Emmett Street Parking lot. Affordable housing was the top priority identified by the community for the development of the lot.

Based upon the community input gathered in the fall of 2014, not-for-profit affordable housing developer Bickerdike Redevelopment Corporation and Landon Bone Baker Architects worked with the Chicago Housing Authority, the City of Chicago, 35th Ward Alderman Carlos Ramirez-Rosa, Logan Square Neighborhood Association, and Logan Square Preservation to craft a proposal for a 100% affordable mixed-use building with 100 apartment units and 4,500 square feet of retail space. For full details on the proposal click here. 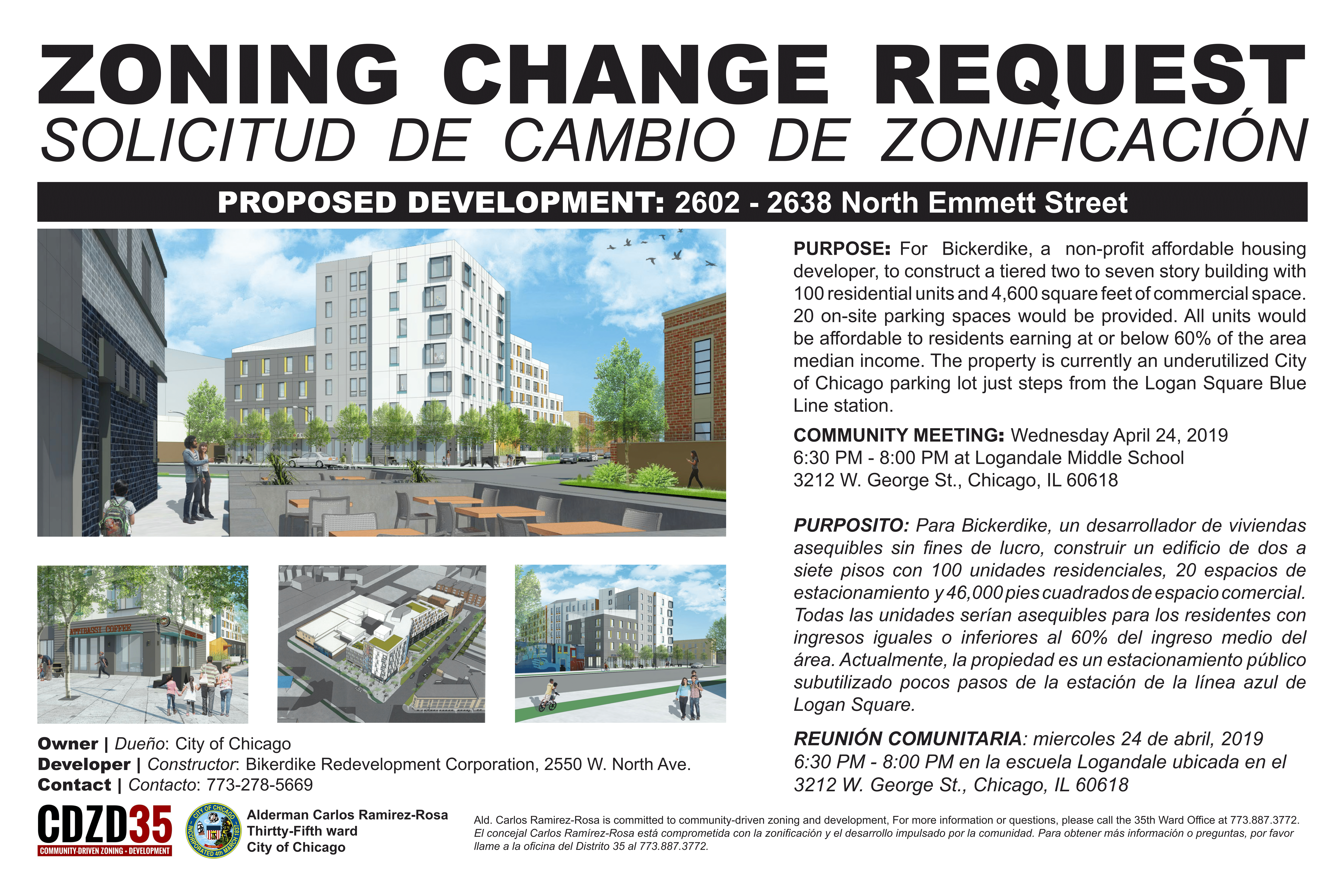 In order for this proposal to move forward it must receive approval from the Chicago Plan Commission and the Chicago City Council.

Under Alderman Carlos Ramirez-Rosa's commitment to community-driven zoning and development, a community input meeting was held on Wednesday, April 24, 2019 at Avondale-Logandale Elementary (3212 W. George) from 6:30-8:00PM. At this meeting, Bickerdike Redevelopment Corporation presented information to 35th Ward residents on the zoning map amendment they seek. 35th Ward residents had the opportunity to ask questions and provide input on the proposed zoning map amendment. The vast majority of attendees supported the proposal, with 77% of comment cards submitted immediately following the meeting in support of the project.

Written comments were also accepted by the Alderman's office for a two week period following the public input meeting. That period ended on May 8, 2019. In total, the 35th Ward Office received input from nearly 1,500 people, of which 1,248 provided home addresses. The vast majority of individuals that provided feedback were in support of the proposal, and based upon the favorable outcome of the Community-Driven Zoning and Development (CDZD) process, Alderman Ramirez-Rosa fully backed the proposal. Click here for a full summary of the CDZD process.